American artist and theorist Warren Neidich will present his solo exhibition “Rumor to Delusion” at the Zuecca Project Space, to coincide with the opening of the 58th International Art Exhibition – La Biennale di Venezia, in Venice, Italy. In a series of works on view, Neidich captures the entangled and psychedelic tale of the Pizzagate mythology in our post-truth moment.

Pizzagate was the fake news story that was circulated at the end of the 2016 presidential campaign which accused Hillary Clinton and her staff of running a child sex slave ring out of the basement of the Comet Ping Pong pizza parlor in Washington D.C.

Many political scientists refer to our times as the post-truth moment because of the difficulty in discerning whether news stories reflect the truth or not. Neidich asks the question as to whether and to what degree sensationalized fictive news stories command our attention and collective behavior. Do they do so more intensely than factual ones? What role does art play in finding the answers? 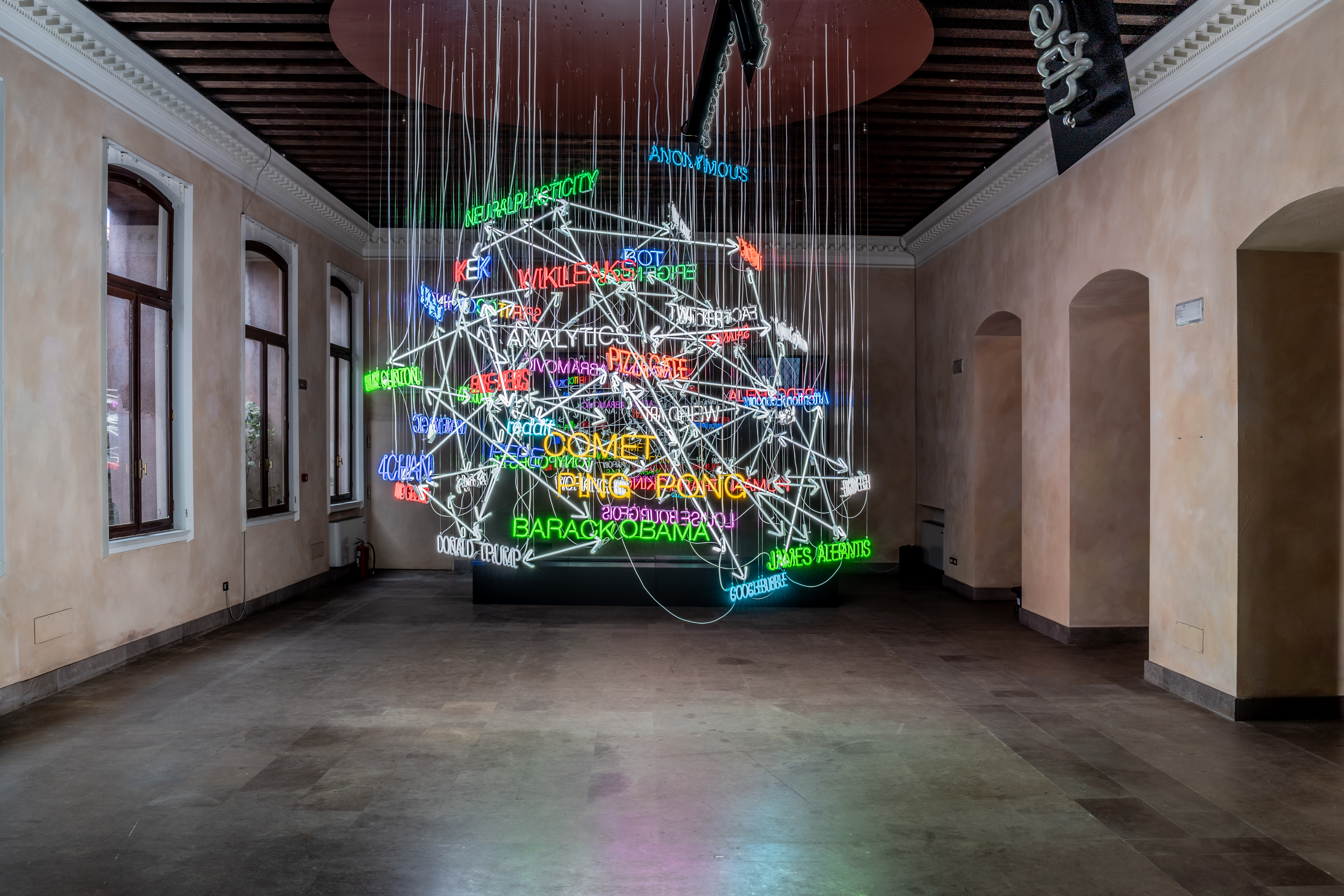 These constitute the core issues at play in this exhibition dominated by the Pizzagate Neon, 2017, a monumental multicolored text-based neon sculpture suspended from the ceiling of the front chamber of the exhibition space. Its composition evokes both the iCloud and the connectome, a network-based model of the brain’s dynamic connection pattern.

The artist suggests that with the advent of artificial intelligence, big data and the attention economy, we have entered a later stage of the knowledge economy, in which the brain and mind represent the new sites of the administration of sovereign power. Neidich’s work is reminiscent of the text-based neon sculptures of Bruce Nauman and Mario Merz and pays homage to the politically inflected mind maps of Joseph Beuys and Mark Lombardi. 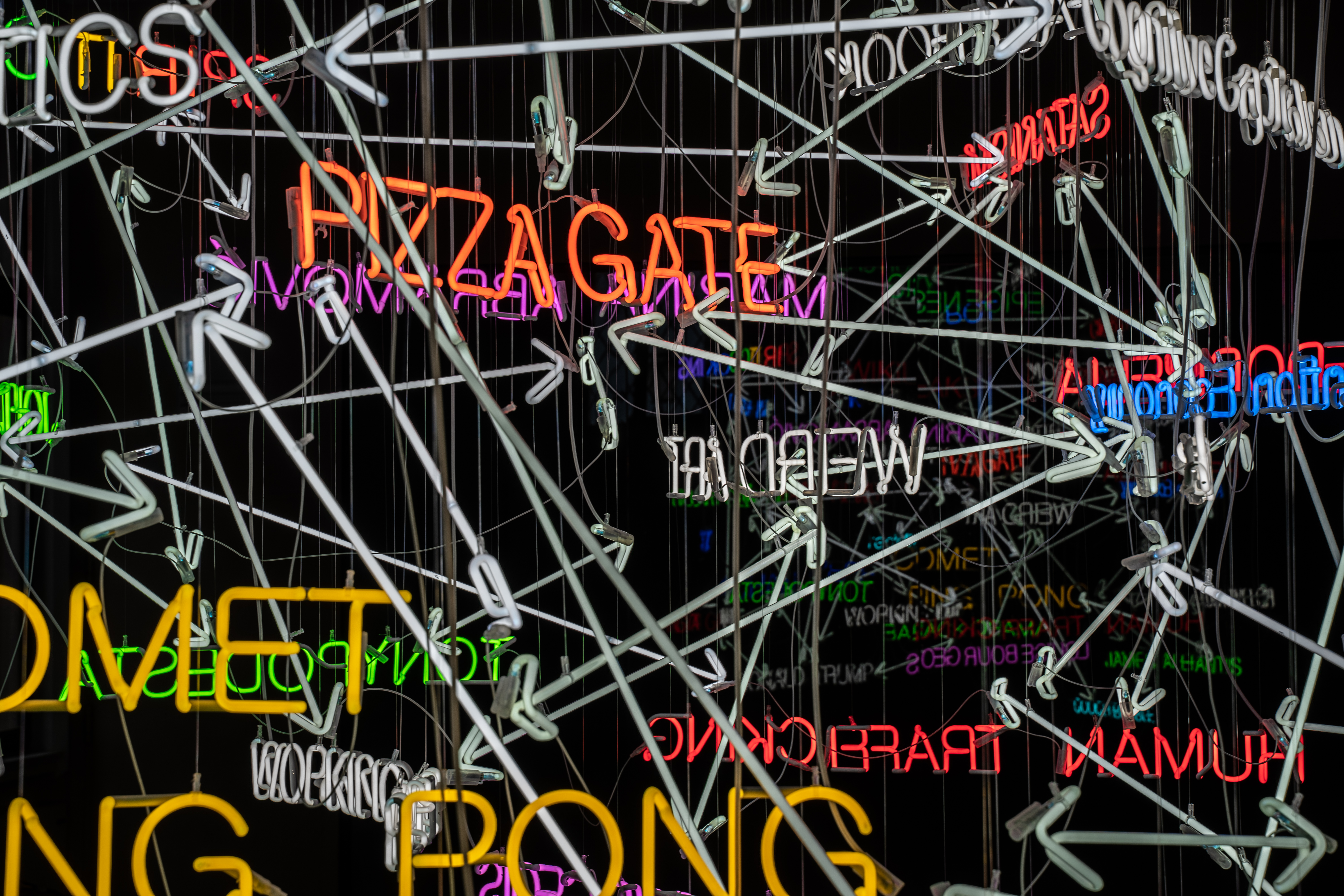 The sculpture will be accompanied by other works such as the experimental video entitled, Pizzagate: From Rumor to Delusion, 2019, recently premiered at Transmediale Berlin, and a performative sculpture, Scoring the Tweets, 2018, first exhibited at the Priska Pasquer Gallery, Cologne, Germany. Using Internet news streams and raw footage filmed at the Comet Ping Pong, the video acts as a soundtrack in dialogue with the sculpture. It collages the tale of Edgar Welch, who incensed by the fake news story, drove up from North Carolina, automatic rifle in hand, to free the children he thought were incarcerated there, with that of the exaggerated reaction on right-wing news feeds to the discovery of Marina Abramovic’s work Spirit Cooking, 1997, in the WikiLeaks emails of John Podesta, Hillary Clinton’s campaign manager. Scoring the Tweets, 2018, is a delicate sculpture consisting of four sets of graphic scores generated from one-hundred and ninety-four tweets made by Donald Trump commenting on fake news which were cut up and assembled upon scotch tape and then strung across microphone stands. During the opening days, as well as throughout the exhibition, musicians well versed in the techniques of improvisation will perform the scores.

Assembled together, these works begin to unravel the complex cultural, political and economic dynamics that define the mediated mass hysteria of American life today. During the opening of the exhibition, Neidich will also launch his book “Glossary of Cognitive Activism”, published by Archive Books. It will form the basis of soon to be announced series of performative lectures and talks taking place in the gallery as well as a multidisciplinary symposium on fake news.