A rare group of early works by Christo will be on offer as part of Colnaghi’s presentation at Frieze Masters, Regents Park, on view from October 13 through 17, 2021. This presentation is possible through the collaboration and support of Alessandro Possati of Zuecca Projects and Christopher Taylor, alongside the Estate of Christo and Jeanne-Claude.

Christo: Early Works comprises nine sculptural works, alongside select works on paper, produced by the artist in the first years of what would become a prolific and legendary career. These early works, including Two Wrapped Chairs, 1961, Wrapped Road Sign, 1963, and Wrapped Vespa, 1963-1964, mark the beginnings of an artist practice and pursuit that would continue to develop over the next five decades.

Alongside Christo’s early works will be select paintings and sculptures from antiquity to modern and contemporary art, reflecting Colnaghi’s mission of supporting cross-category collecting. Among these are two portrait busts from antiquity, notably the Roman Portrait Head of a Veiled Woman (2nd Century AD), as well as sculpture by Claes Oldenburg and Roy Lichtenstein, and painting by Piero Dorazio, Hans Hartung, Heinz Mack, Walter Leblanc, and Pierre Soulages.

Christo: Early Works traces back to late 1950s when Christo first became enthralled with the idea of the found object after moving to Paris. As the Post-War art scene was taking apart the previously known conventions of artistic practice, Christo devoted himself to the wrapping of such objects. These earliest artworks, dating from 1958, were constructed from appropriated and everyday objects, such as bottles, cans, furniture, and oil drums wrapped in canvas, bundled in twine, and occasionally overlaid with automobile paint. His first solo exhibition, at Galerie Haro Lauhus in Cologne in June 1961, included his inaugural collaboration with Jeanne-Claude, Dockside Packages, a collection of draped oil barrels and rolls of industrial paper arranged outside the gallery along a dock. Covered in vast quantities of light-coloured fabric and battened down with cables, ropes, and knots, these found objects turned suddenly into architectural and natural forms, ghostly presences that disrupt their surroundings.

Even if the first works were produced as instinctive artistic experiments, Christo soon recognized the direction where his creative process was taking him. Whereas he concealed the first wrapped objects with layers of glue, sand, and varnish to create a crusted, haptic surface, he soon began to free the cloth from the thick patina, so that the piece was subject to constant change. The different textures, the fabric’s muted colors, bulges that catch the light, tension, the play of strings and ropes even with ordinary, unsophisticated knots, made the wrapping a sensitive envelope not aimed to disguise some secret contents, but rather to visually enhance the expressive possibilities of volumes, fabric, twine and rope.

After 1960, Christo began to experiment with a new material from daily life: transparent polyethylene. Albeit plastic would make contents more evident, its focus was never making the wrapped objects enigmatic or dreamlike, but rather violating our operational relationship to them and directing attention towards composition, colour, tactility and volume. As an avid scavenger, he’d hunt new objects to wrap: he confiscated his landlord’s chairs, Jeanne-Claude’s shoes, their son’s stroller, a Vespa motorcycle, magazines, bicycles, and telephones. Encased in a chrysalis, they are metaphysically in transit, immortalized in a fraction of a second, in which time, so ephemeral, becomes infinite. 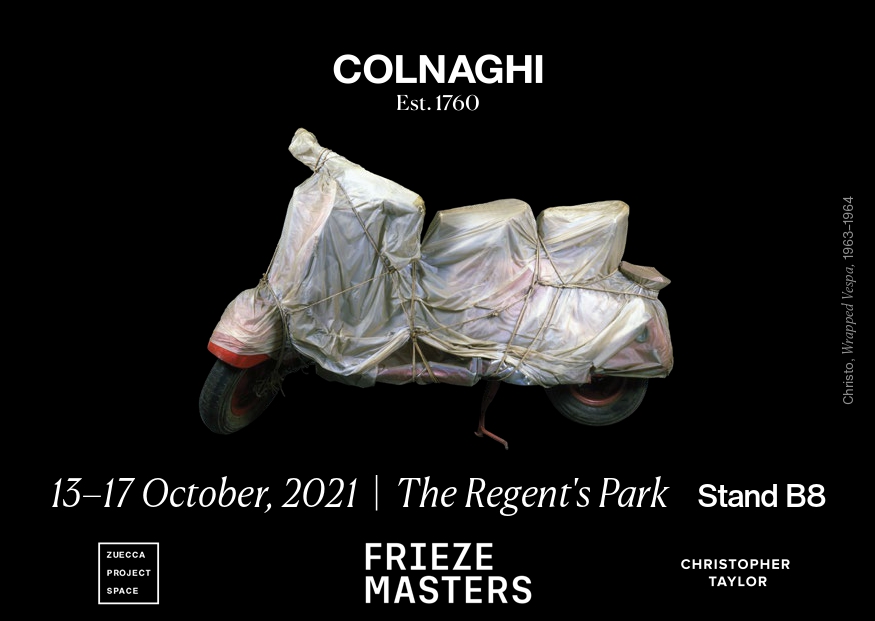